You are here: Home / Applications / Dropbox for Windows 10 Released With Biometrics Support and More 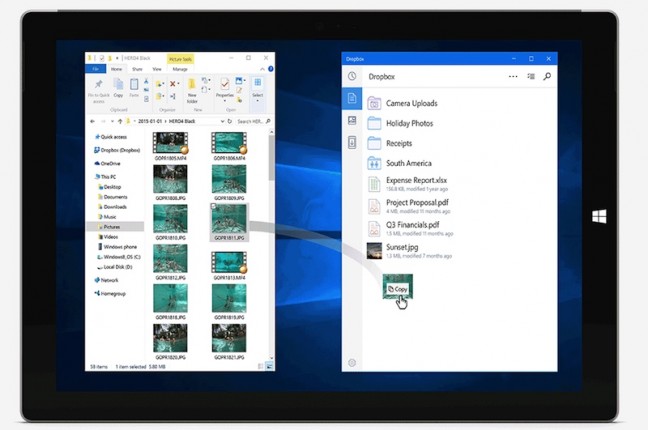 Microsoft on Thursday announced that Dropbox has released its universal Windows 10 app, adding that users can utilise Windows Hello biometrics feature to sign into their Dropbox account.

Dropbox for Windows 10 offers several interesting features including the ability to allow a user to drag and drop files from Windows File Explorer to Dropbox app. Users can also utilise Quick Search and set up interactive notifications. However, more notable is support for Windows Hello, which will allow users to log into their account using fingerprint or face for authentication.

Dropbox already exists on Windows 8 as a modern app, and the new release is a re-launched app for the new desktop version. Dropbox said that users can continue to work on Windows 8 app, but they will be slowly upgraded to the new version.

Dropbox and Microsoft partnered in November 2014 and have since released a number of handy integrations – including the ability to edit Office files from within Dropbox app. Dropbox says that the partnership has resulted in 17 million users taking advantage of their collaborated features.

“Microsoft is excited to partner with Dropbox to bring more cloud storage and productivity services to Windows 10 across PC and tablets. With the arrival of Dropbox, Windows 10 fans have easy and convenient access to photos, documents, and files anytime, anywhere,” said Steve Guggenheimer, Corporate Vice President of Developer Platform & Evangelism and Chief Evangelist, Microsoft

Dropbox said that an app optimised for tablets will be available in the coming days. It is also working on a Windows 10 Mobile app, which it expects to release in “early 2016.”